As another example of pencil calligraphy, here’s a page from one of my journals, featuring a quote from Miles Davis: 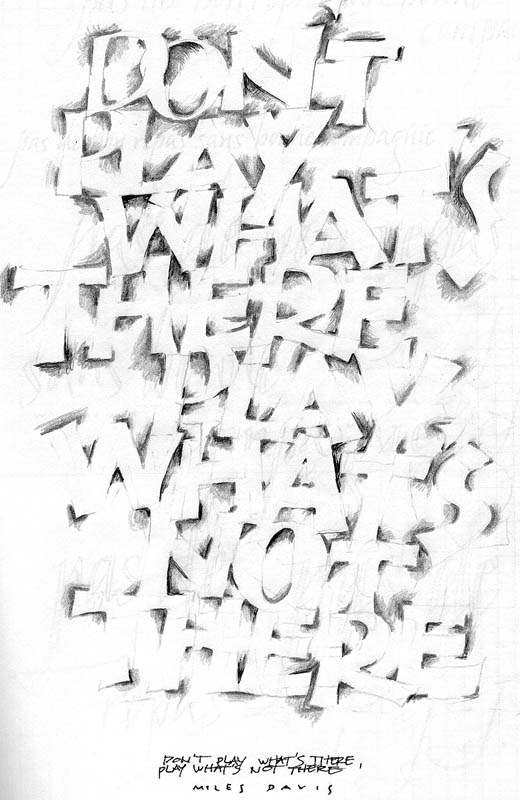 Miles was one of my early jazz idols. I started playing the trumpet when I was about 8 years old, I think, and in my high school days played several hours a day. I continued to play through college in marching band, concert band, and orchestra, and even during my working career in engineering I continued to play in a jazz band at Bell Labs for many years. These days, I’m more of a several hours a month player, playing mostly seasonal special music for our church with one of my good friends.

The last week or so I’ve been thinking about yet another aspect of negative space and “what’s not there.” My mother has been in the hospital for cancer surgery, having had a large tumor removed, and while she seems to be recovering well, this has started me thinking about all that becomes missing in our lives as we age. Anita and I have each lost a parent in the past 9 years, and I’m now old enough that friends of many years are starting to exit the stage; one good friend succumbed to cancer this past October. I was thinking about how we keep all these people alive in our lives and our memories, and the quotation above came to mind – we have to “play what’s not there.” We mourn our losses, of course, but I think it’s much more important that we honor those we have lost by thinking of how they lived, and, when we can, acting as they would have acted and living as they taught us. If we keep our eye on those negative spaces as we draw our own lives, we can create a beautiful unity between what once was, and what still is, and what can be.

One thought on “Play what’s not there”