There’s a lot of less-than-valuable and less-than-accurate information on the Internet, but occasionally, some of the overused online quips contain real wisdom. On the photography forums that I follow, one of the most commonly repeated lines is “The best camera is the one you have with you.” As I mentioned in my previous post, I’ve been suffering from New Camera Acquisition Syndrome, but in the meantime, the camera I have with me is the Nikon D300, on which I usually have my 17-55mm Nikkor f/2.8 zoom lens mounted. This setup has been my most frequently-used camera and lens for about four and a half years now, and it has provided me with a lot of enjoyment, and here and there, a little revenue. But nothing I’ve gotten from this gear has meant as much to me as the photos I’ve shot since I became a grandfather last summer.

Our granddaughter, Anna, is now 9 months old, and was here for a visit last week, along with her parents and her Czech grandfather, so of course her American grandfather had the camera out constantly. Here’s one of my favorite shots from the visit: 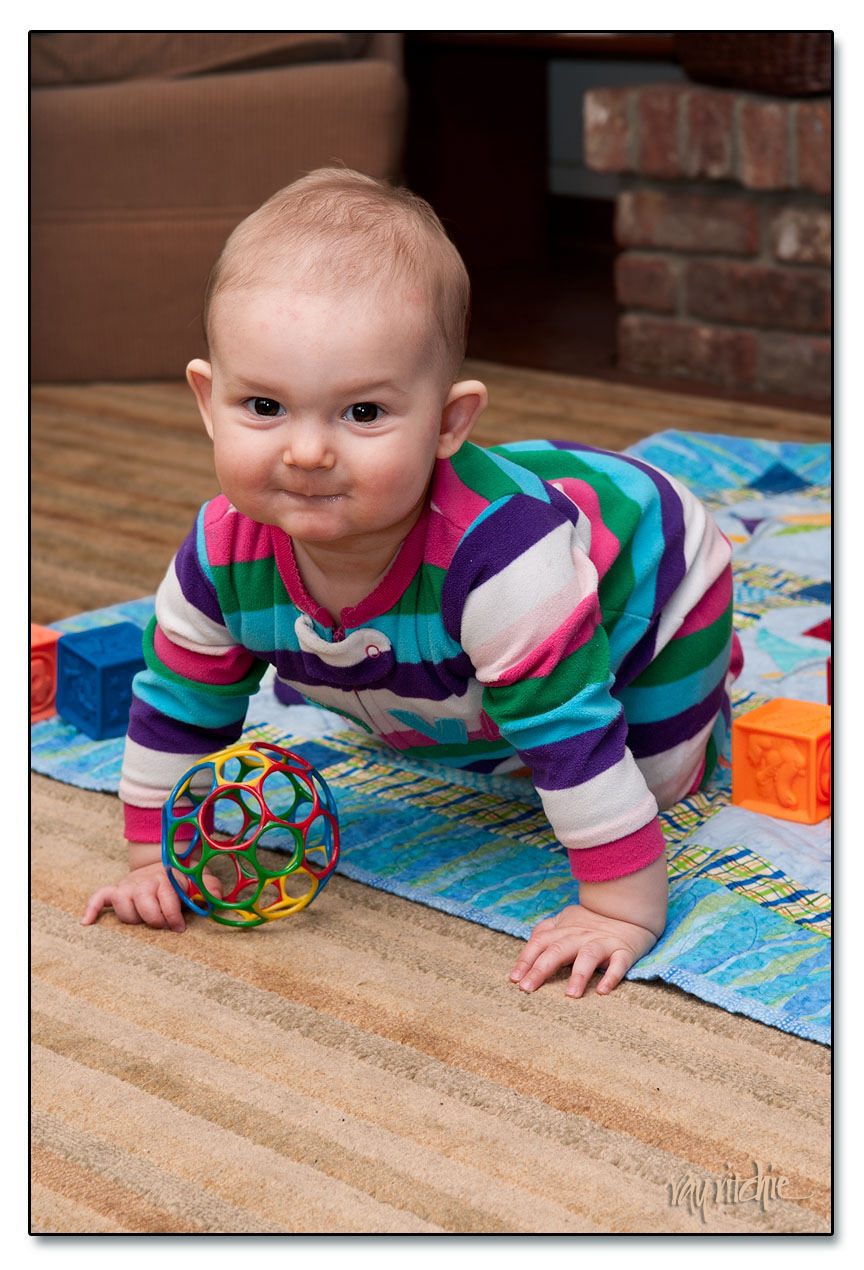 I’ve never considered myself a “people” photographer, but Anna has been making me want to learn. She has a wonderfully expressive face, and changes each time we see her. She just started crawling recently, and now has to be watched every minute – which is a good excuse to take more photos, since we have to be watching her all the time anyway. And Anita and I now have iPhones full of baby pictures – the modern grandparents’ “brag book.”

Any camera I own someday in the future will have a hard time giving me the pleasure that I’ve already experienced by photographing her with the camera I have.

[Technical notes: Shot at f/6.3 and 55mm, ISO 200, with my 17-55 zoom and flash lighting. The flash was a single SB-800, mounted on the camera with a miniature "softbox" to diffuse the light, and aimed about 60 degrees upward, so that a portion of the light was reflected from the ceiling. I was having some troubles with my flash due to having inadvertently set the flash to the wrong mode, so the shot was underexposed by about one f-stop, and compensated in postprocessing in Lightroom 3 and Photoshop CS5.1. I also used Photoshop to darken and slightly blur the background, and to sharpen and enhance the brown in Anna's eyes, and finally, I removed a number of small scratches she had inflicted on herself with her fingernails as she slept]

6 thoughts on “The best camera”