Most people would go from Mt. Rainier to Mt. St. Helens by going back to the Interstate (I-5) and then getting off that at the Silver Lake Interpretive Center, and taking the 47-mile mountain road up to the blast area on the western slopes, where there is a Visitor Center. But that would have been too easy. Actually, it looked much quicker on the map to take the back roads to a sequence of viewing areas on the east side that starts with Bear Meadow and ends at a point overlooking Spirit Lake.

Bear Meadow is the spot where photographer Gary Rosenquist was standing on May 18, 1980 when he captured a famous set of photos of the explosion of Mt. St. Helens. As the marker at the site says, “Located 11 miles from the mountain, Gary began taking pictures shortly after the 8:32 AM earthquake which triggered the great landslide. He continued to take shots as the hot ash-filled cloud raced towards Bear Meadow at over 300 mph. The group quickly realized their danger. Within minutes they were driving northward, groping their way through the darkness caused by falling ash.” Hmm…maybe Gary and his friends weren’t all that quick.

Anyway, that’s the way we decided to go in, and we were rewarded by an ever-changing set of views as the road hugged the mountainsides. If you look at Mt. St. Helens today from a viewpoint on a line with Bear Meadow, you’ll see something like this: 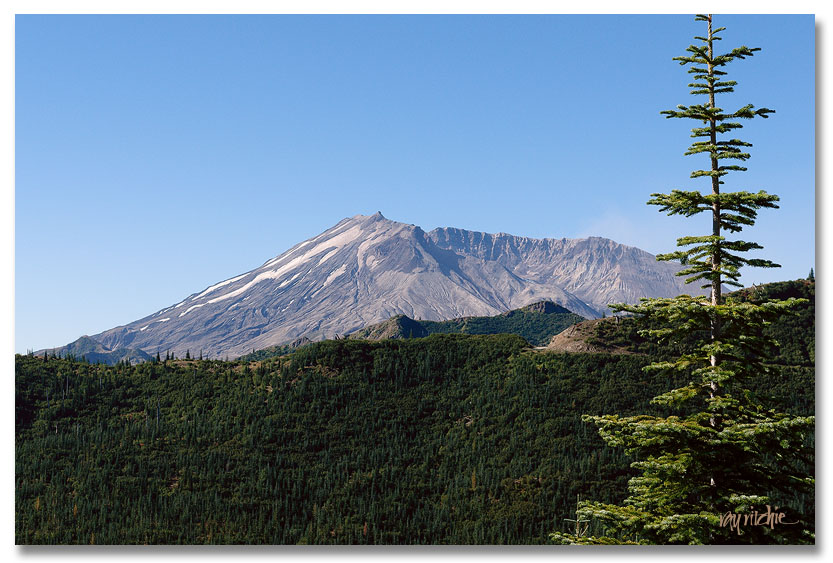 (This shot was from much closer than Bear Meadow, but the line of view is about the same) Notice that the mountain slopes facing away from the blast are completely forested, while Mt. St. Helens itself is completely bare. But as you enter the blast zone, the story changes dramatically. This panorama shows how the view changes from outside to inside the blast zone (click on the photo for a larger image):

As you can see, even thirty years after the blast, the slopes facing Mt. St. Helens are only beginning to have a few small trees. Here’s a closer shot of one of those slopes:

This looks pretty barren, but when you get to the end of the road, only a mile or two from Mt. St. Helens, the landscape looks like this: 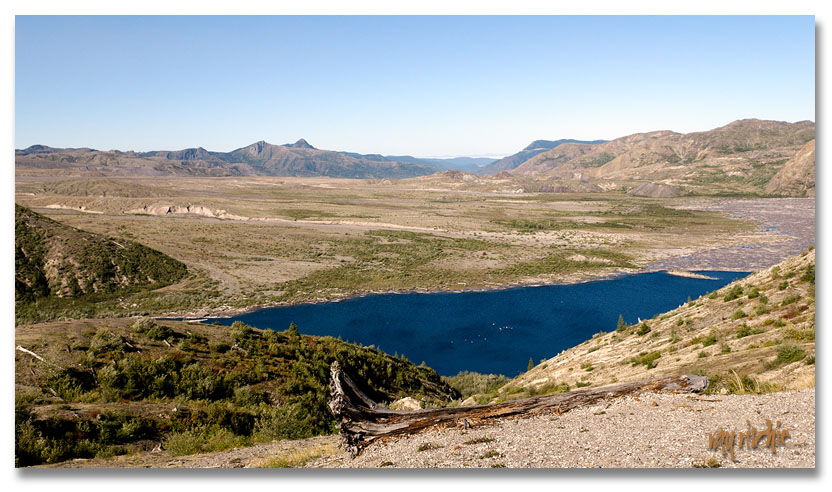 You’re looking here at a corner of Spirit Lake, which was raised 200 feet by the mile-wide landslide that followed the eruption. Spirit Lake was formerly a major recreation area. Mt. St. Helens is to the left of this shot, and from this same viewpoint looks like this: 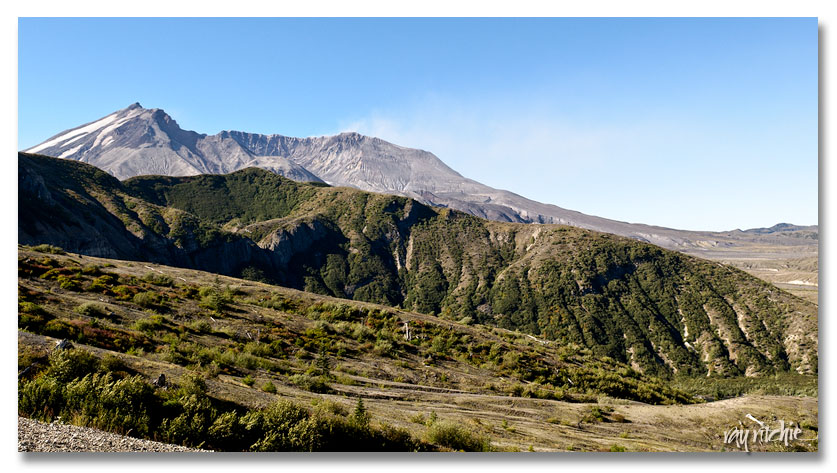 I believe that’s steam from the volcano that you’re seeing above the mountain, but Anita says it’s just a cloud. Mt. St. Helens is still considered to be in a period of activity. If the dome of lava inside the crater continues to grow at its present rate, Mt. St. Helens will be restored to its former height in about 200 years.

We thought we were finished with our trip to Mt. St. Helens at that point, but we quickly found that the drive back down to Bear Meadow is much more harrowing than the drive up. On the way up, you’re hugging the mountainside. On the way down, you’re driving at the outer edge of the road, often with no guardrails and no shoulder. In fact, in a number of places, the ground underneath the outer roadway has eroded away slightly, and the pavement has begun to collapse. Sitting in the passenger seat, as I was, you look out your window to drop-offs that seem to go down forever. We were pretty much on edge for the next several hours, as even after we left the Mt. St. Helens National Volcanic Monument, the road continued to be a narrow, winding two-lane mountain road with no shoulder, all the way down to Cougar. I guess the designation “Closed in Winter” on the map should have been a tip-off.

From Cougar, we followed the highway along the Lewis River back to I-5, and took that across the Columbia River to the Portland area, where we found a room in the suburb of Troutdale.  We dropped the bags in the room, and then went back out to nearby Hwy 30, which is labeled as a “Scenic Byway.” It more or less parallels the Columbia River, winding through the Columbia River Gorge and past a series of waterfalls. Our first stop was at Vista House, where we had this view of the River Gorge: 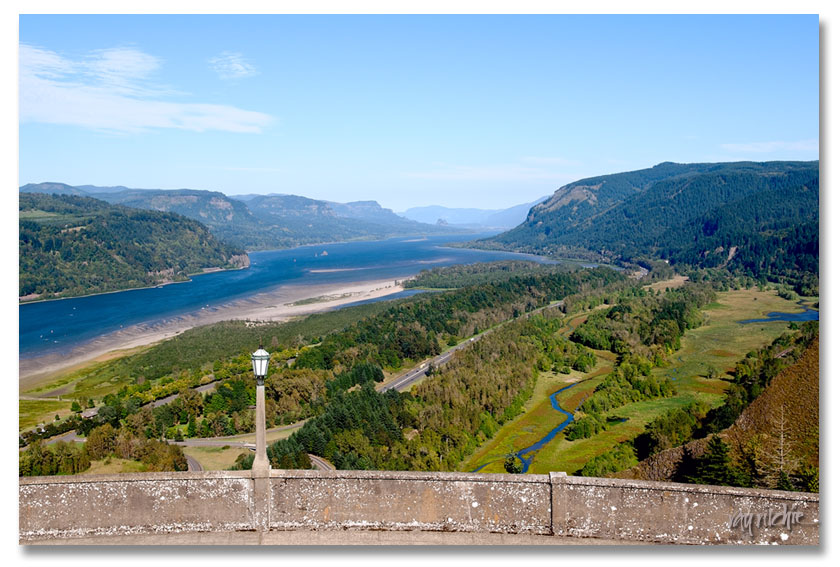 We might have stayed a little longer at Vista House, but we were being pushed around by winds that seemed to be gusting to 40 or 50 mph. The park ranger at the information desk told us this was just a typical day – nothing exceptional in terms of wind. We continued along the 12-mile waterfall run of Hwy 30, and visited six different waterfalls, finishing up with Multnomah, the most famous, and also the highest, with a 620 foot drop in two cascades. I wasn’t able to find a spot to shoot all of both cascades, but here’s a classic view that I was able to get: 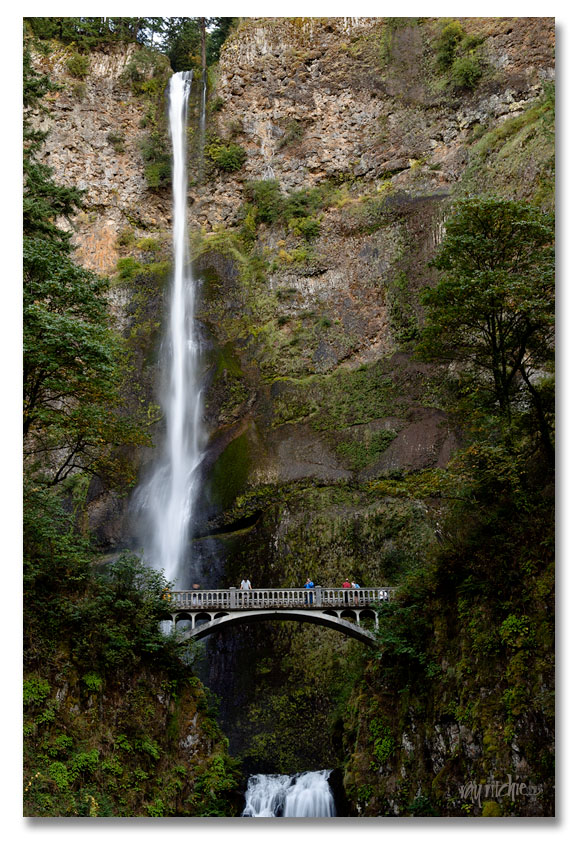 As mentioned before, more images will be available on Flickr. Next: Crater Lake.