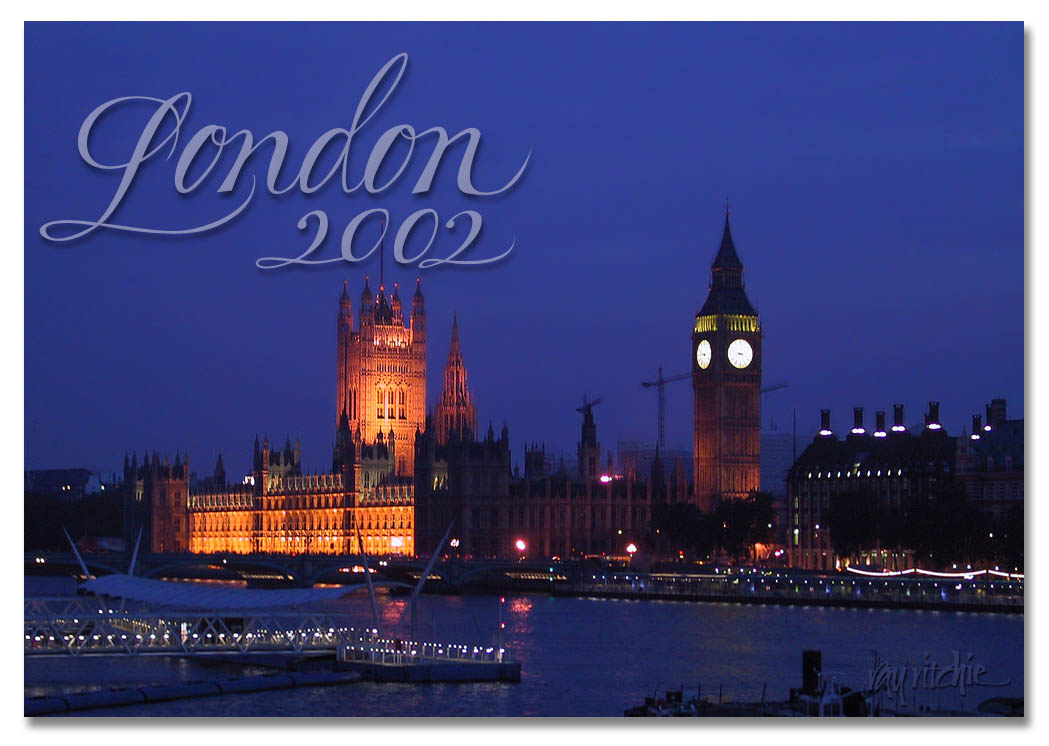 This is the second part of my series on my first 10 years in digital photography. The first part can be found here. I plan to make additional posts about once a month for the rest of this year, sharing a few images from each of the past 10 years.

In August of 2002, Anita and I made a trip to London with my parents, who were 79 and 80 years old at the time. My father, who had been physically robust all his life, was now severely impacted by Parkinson’s disease. He had been through a couple of years working with several doctors trying to get his medications properly adjusted, and had experienced periods of being so heavily sedated that he couldn’t stay awake at the dinner table, followed by times when he was having vivid delusions, seeing “bugs” everywhere. So we were thrilled to see that his doctor finally seemed to have gotten the balance of the drugs right, and Dad felt well enough that he agreed to go on this trip. As it turned out, it would be the last extended trip I was ever able to take with both of my parents; Dad underwent heart surgery 5 months later, and suffered a series of terrible complications leading up to his death in 2004.

This was mostly a family trip, without a lot of time dedicated to “serious” photography, but of course I carried the Canon G1 with me everywhere. While I have many photos to remind me of this bittersweet family time, I have only a few images I want to share here. The photo above was taken from the Millenium Bridge, a footbridge built across the Thames just down river from the Parliament building and St. Paul’s cathedral on one side and the Tate Modern museum and the London Eye (or, Millenium Wheel, as I think it was once called) on the other. I didn’t have a tripod, so I just pressed the camera against the railing of the bridge to make the shot. Unfortunately, that particular bridge has quite a bit of vibration – in fact, it came to be known as the Wobbly Bridge, and was closed for almost two years after its opening in 2000, as engineers modified the design to eliminate the worst of the shaking and swaying – so the shot is a little more fuzzy than I might have liked. But it’s my only decent night shot of London, and for me, at least, it’s an iconic memory, reminding me not only of the familiar landmarks of the London skyline, but also the nightfall of my father’s life.

We covered a lot of ground during this trip, and as a lettering and design buff, I found details everywhere that interested me. At the Tower of London, where we lost Dad for a frightening 30 minutes, I found a statue of Trajan, who was emperor of Rome during the time the Romans built their stone walls around Londinium. Trajan is known to calligraphers because of his famous column in Rome, commemorating his victories in the Dacian Wars. The base of the column is inscribed in letters that are still considered some of the finest examples of the ideal proportions of Roman capitals. I’ve never been to Rome to see the original column, but I was able to see a full-size plaster copy of all 35 meters of it in London in the Plaster Courts of the Victoria and Albert Museum. Here’s a close-up of the base inscription from that plaster copy: 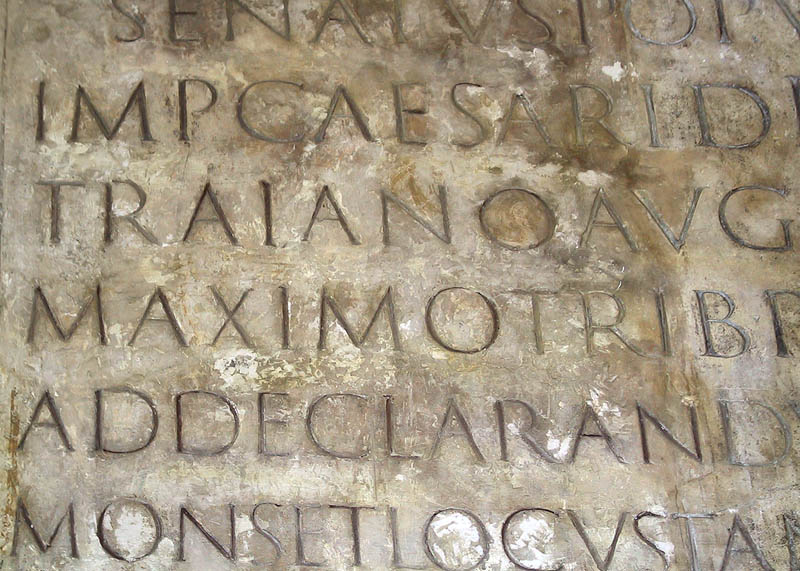 At the British Museum, I saw the Rosetta Stone, and was also taken by many fine examples of Celtic art, which has fascinated me since I first learned uncial lettering 30 or more years ago. I thought this decorative buckle was a particularly beautiful example of classic knotwork: 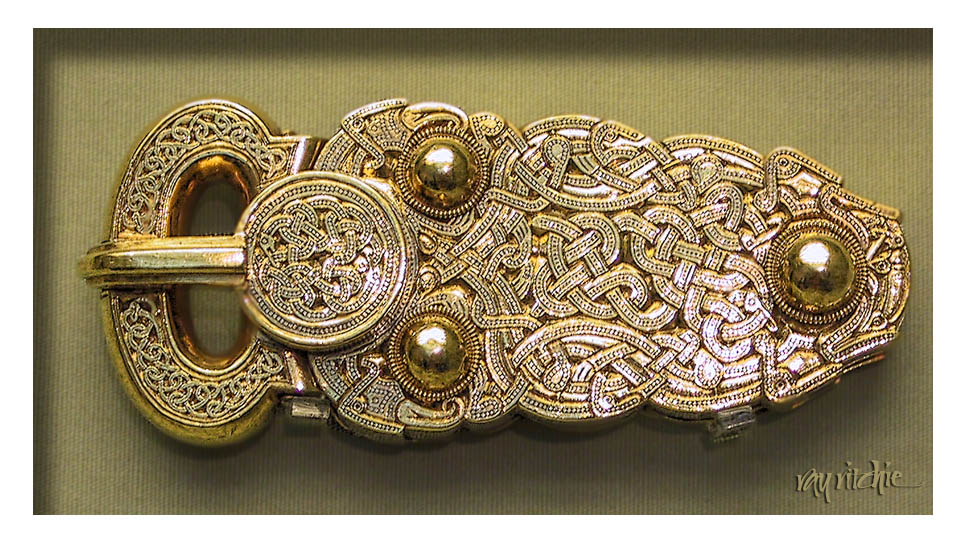 We went all over London via the Underground, and every time we entered or emerged from a station, I saw something like this: 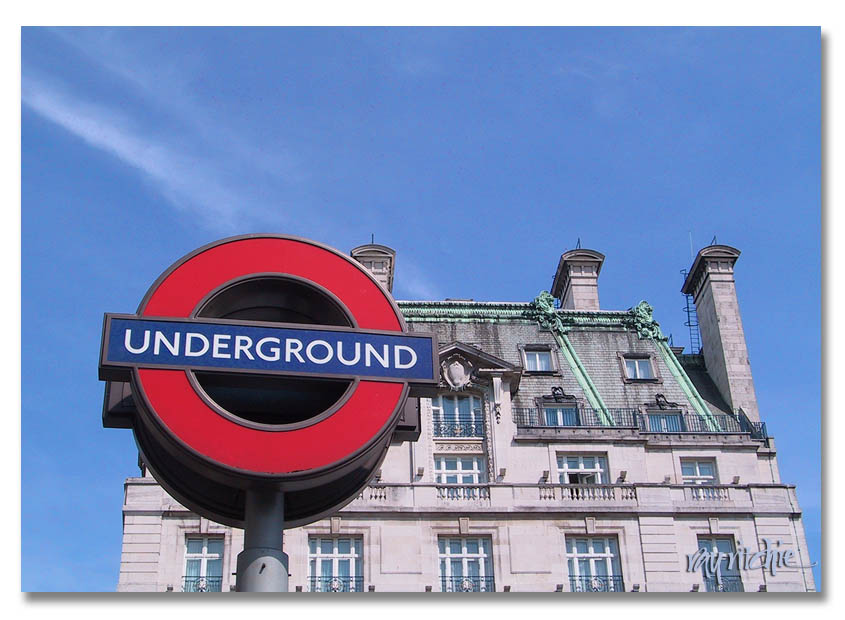 Most Londoners probably take those signs for granted, but the letters are actually historically unique. Although today’s signage is in Gill Sans Serif, it retains much of the look of the original typeface designed by Edward Johnston, who also designed the “bullseye” logo. Johnston is widely considered to be the father of modern calligraphy, in that his study and analysis of medieval manuscripts at the British Library led to a revival of interest in the art of hand lettering in the early 20th century. He taught at the Central School of Arts and Crafts and the Royal College of Art, and influenced a whole generation of lettering artists whose artistic descendants dominate the field of calligraphy even today. The original printing blocks for Johnston’s Underground type designs are on display in the London Transport Museum.

This trip was the last time I used my Canon G1 extensively. It continued to impress me with the quality of its images in good light as well as for close-up work, and it was not only my introduction to digital photography, but it was also responsible for reviving my interest in photography in general. Even today, its images hold up pretty well for web purposes. It left me wishing for more, though, and in December of 2002, I bought a Nikon D100 digital SLR as a gift to myself on my retirement from my engineering career. That camera was my main tool for the next five years, and I’ll have a lot more to say about it in the next few posts in this series.