I’ve been holding off from my usual practice of posting my Christmas card, as I was late getting it out, and I like for the physical cards to arrive before the virtual card appears here. But now I’m up against a deadline again, with only two days until Christmas day, so I need to pound out a blog post.

I’ve been doing these calligraphic cards for probably thirty years or more now, and they’re usually dominated by the calligraphic design. But for several years, we’ve also included a family photograph with the mailed cards, so Anita asked if we couldn’t have a family photograph card this year. The family was all here for Thanksgiving, so we bundled up, posed ourselves on the front steps for the camera on the tripod, and then quickly threw off our coats and hid them behind us while I ripped off a quick sequence of a dozen or so shots with the remote. As usual, each individual person looked their best in a different shot, but we all seemed to agree on one as the cutest overall, thanks mostly to Anna’s expression.

I added a quote from John Greenleaf Whittier in a modernized version of medieval “artificial uncial” calligraphy below the photo, created a quick background in Photoshop, and then sent the whole thing off to Shutterfly for printing – also a change for me, as I’ve usually done all the printing myself. Here’s the card front: 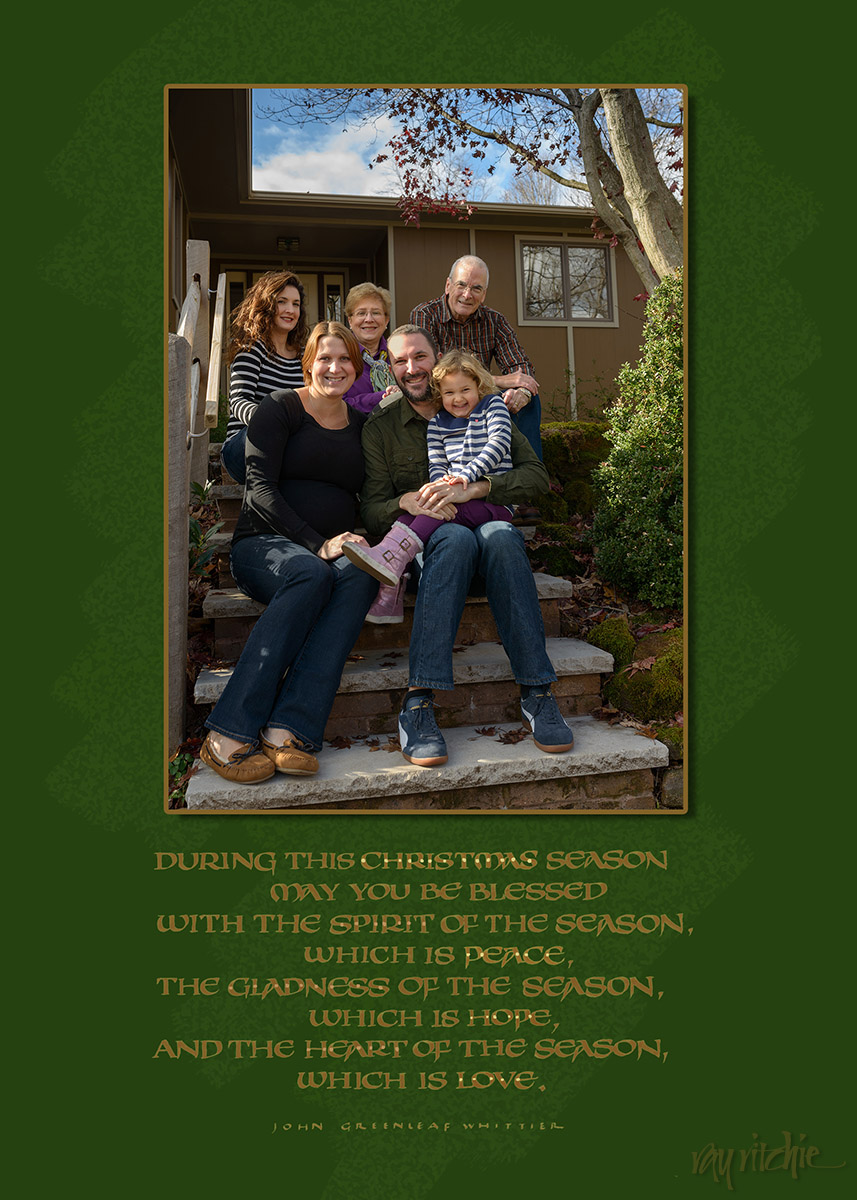 Since the Shutterfly templates allow a small image on the reverse side of the card, I decided to include a tiny image of one of our “12 Days of Christmas” tree ornaments that Mom made for us over a period of several years. Here’s the “Swans a-swimming” ornament I used: 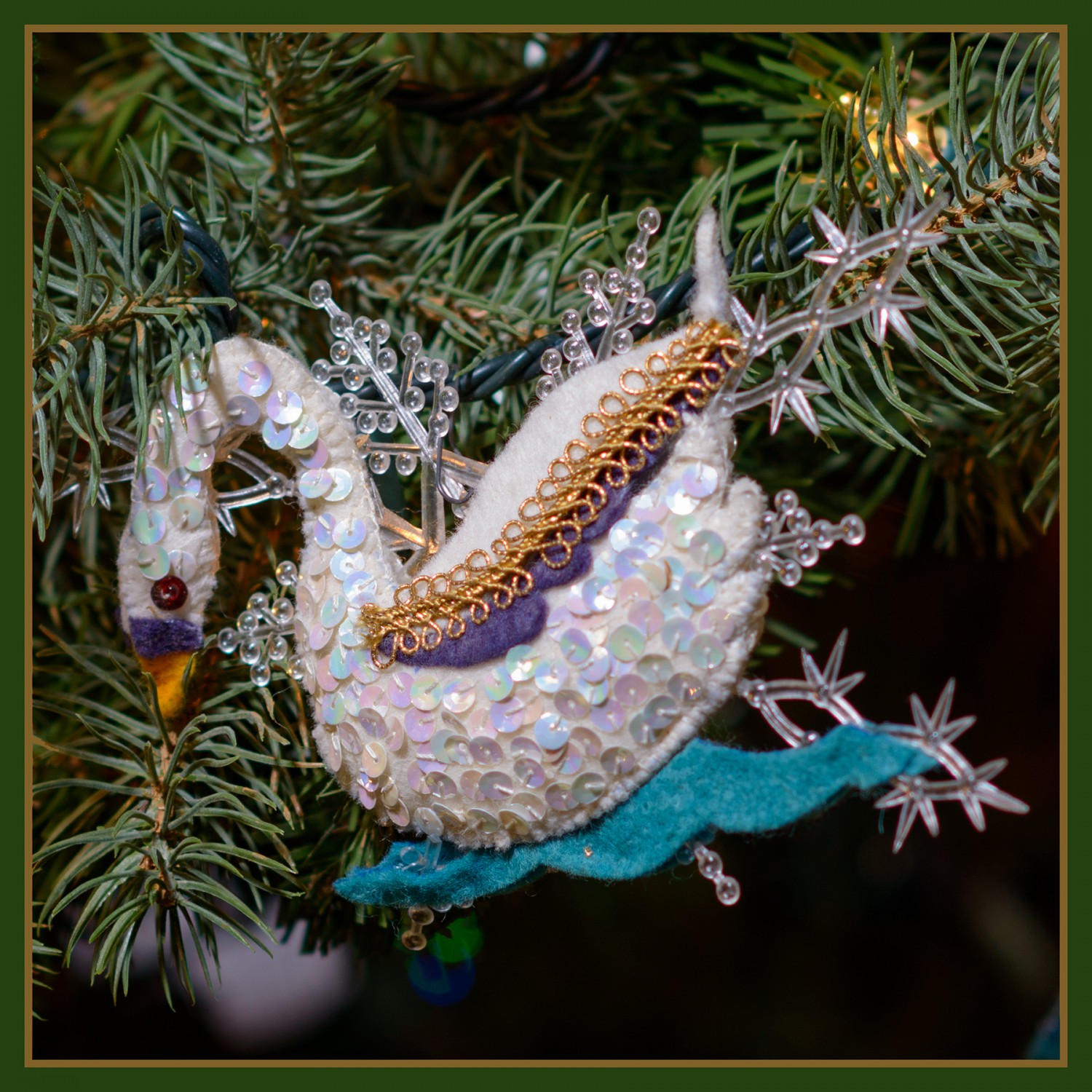 and here’s a bigger crop of the calligraphy, for those whose interest runs that way: 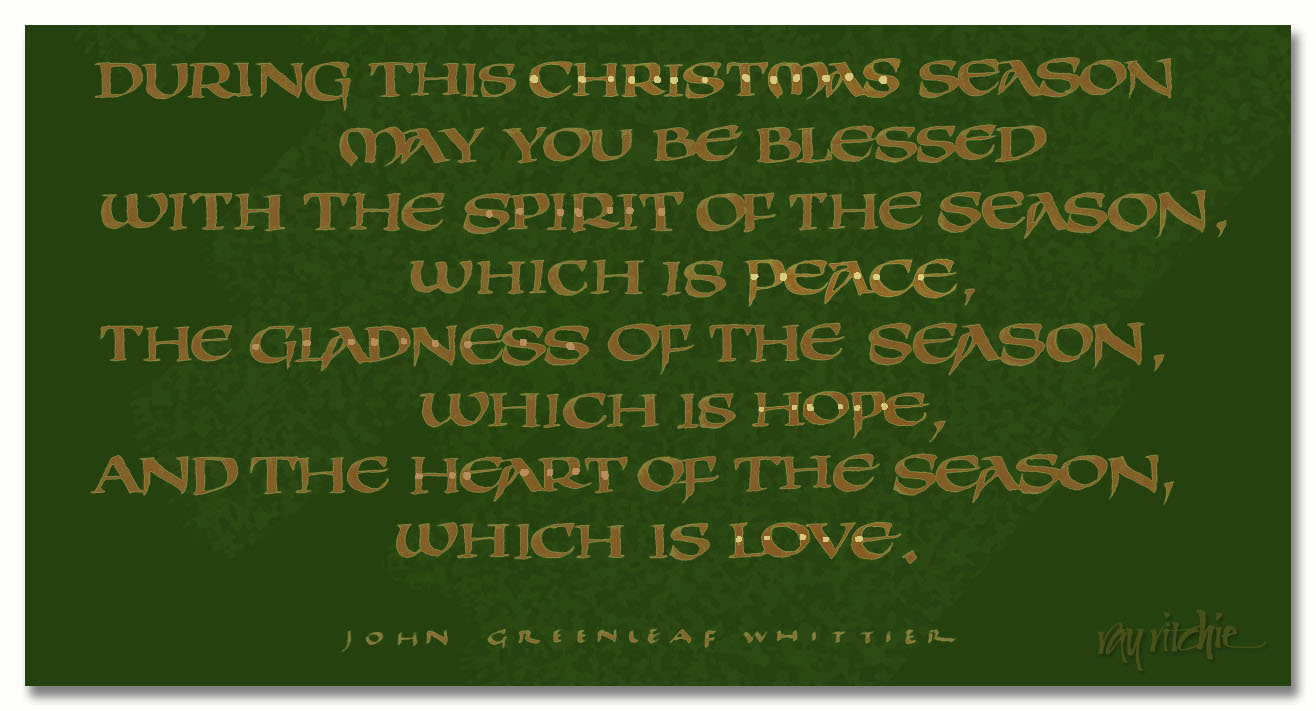 Here’s wishing you all the blessings of Christmas, and a wonderful 2015.

This style of calligraphy is a little more difficult than some forms of uncial, as it uses a fair amount of pen-twisting and skating on the corners of the nib. You may notice that not all the downstrokes are the same width – that’s deliberate, but since uncial is normally written with the nib held almost horizontal, to get a thinner downstroke, you have to twist the nib quickly from horizontal to a more vertical angle as you move it down. In the case of the downstrokes of the N’s, it’s twisted completely vertical almost immediately. To get the little triangular serifs on the T’s I used a quick counter-clockwise flick on the left corner of the nib for the left serif, and then after the horizontal stroke, a clockwise flick on the right corner for the right side. A somewhat similar technique is used for the serifs on the lower left and upper right of the S’s.

You may also notice that there are two forms of A’s in the quote. Most of the A’s are an older form typical of lettering from the 1500′s, but at the beginning of the penultimate line, I used a more modern, conventional form. I did that just because the word “And” is relatively unimportant, and I didn’t want the eye to pause there as much.

I’ve posted several times in the past about my doodling in church, which I’ve come to refer to as “callidoodles.” I don’t really do this as a tool for generating design ideas – it’s more of a form of meditation, or distracting one side of my brain while the other continues to work. But once in a while, some promising ideas do emerge, and since I haven’t posted much this year, I have a pretty big stack of callidoodles that I haven’t shared. Here are a couple of recent ones.

A lot of my doodles involve incorporating some sort of small picture or graphic with lettering, like this:

I liked that doodle for the clean lines of “Rescue Me” against the more classical Roman form of “LORD,” as well as the way the breaking waves of water work around the letters. I think it could be re-worked in more finished form by using some Photoshop effects to generate the splashing water, and perhaps adding some 3-D effects to the letters.

In other doodles, I occasionally find that a new calligraphic design just pops out of my subconscious:

It’s not unusual for me (or any calligrapher, for that matter) to use a “liaison” in joining two or more letters in my calligraphy, but in this case, there are actually seven letters involved, which is much more complicated that I would ordinarily attempt: the bottom of the “L” in “lose” forms the crossbar of the “f” in “find,” the “s” in “lose” also forms the left-hand stroke of the “N” in “find,” the exit stroke of the “e” becomes the ascender of the “d,” and the dot over the “i” in “find” also becomes the crossbar of the “e” in “lose.” If I had been consciously attempting this, I don’t think I could have pulled it off, but somehow, as I was just doodling without attempting to be “successful,” I managed to do it. I think it’s an interesting idea for a design. And lifting up the two words “lose” and “find” and tying them intimately together works for interpreting the scripture quote as well.

I’ve been asked to put together some of my calligraphy to be used as graphics on our sanctuary video projection system for an upcoming worship service (date to be determined), and I’m thinking I’ll try to do some finished versions of some of my callidoodles; these two will probably be used, if I can pull them off once the more careful and cautious parts of my brain get involved.

I’ve been promising myself I’d get back to this blog in December (even though it doesn’t seem to draw many comments), and as I ate one of the last of our batch of Thanksgiving sugar cookies this morning, I remembered my good intentions and started thinking about how I’d never shared the story of “Smiley Pig” here. 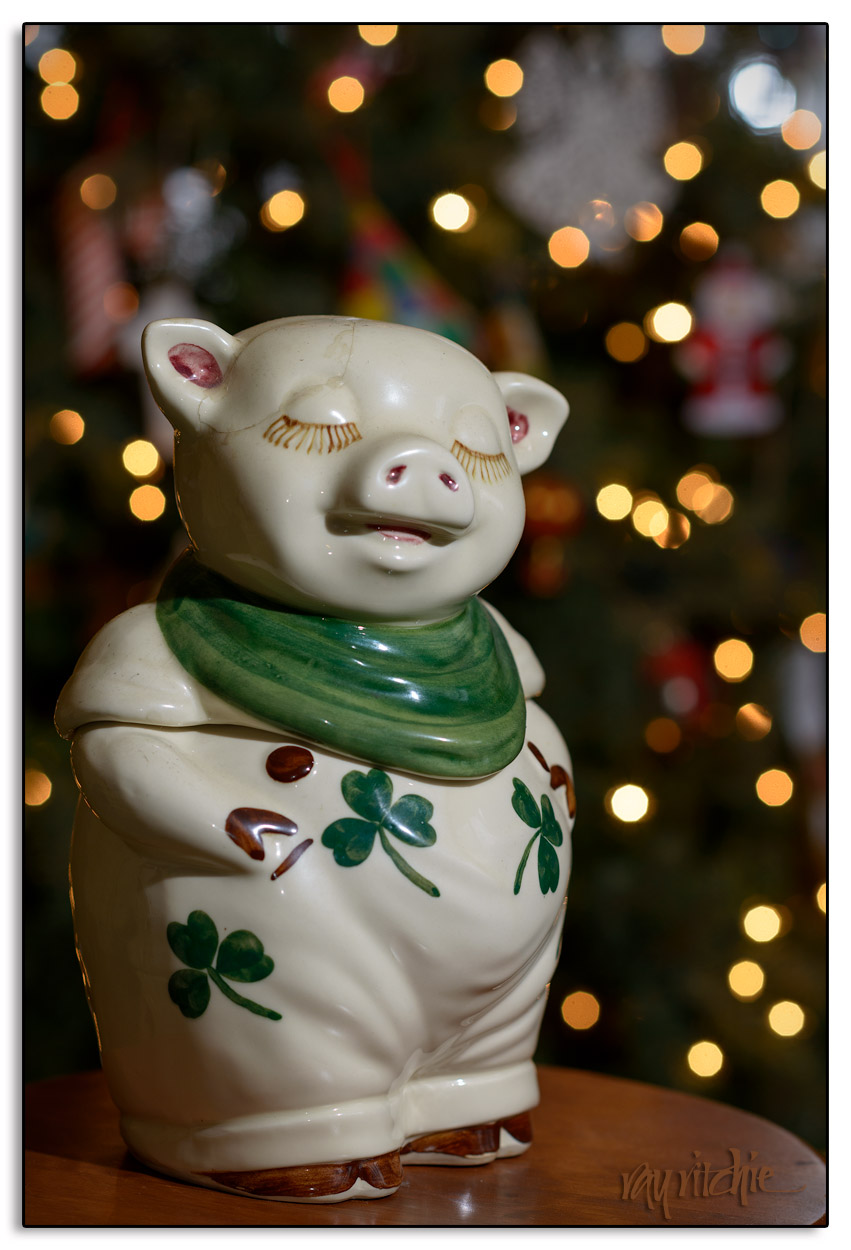 Smiley is the cookie jar who sat in Grandma Bourne’s kitchen from my earliest memories until my grandparents had passed away and the house was closed and sold. He then moved to my mother’s home, and when she died, he came to our house. Whenever we would visit Grandma, the first thing we kids did after hugging our grandparents was to run to the kitchen and look in the cookie jar, and Smiley was always full of cookies. Until Grandma got to be too old and sick to cook any longer, the cookies were almost always her homemade sugar cookies.

Somehow in his later years, the old pig had his head dropped and broken. I know it must have been after he arrived at Mom’s house, because although she always had infinite patience for tasks like gluing broken pottery back together, I can see that in this case she left a lot of glue on his forehead – so  it must have been in the days after her skills were starting to suffer.

According to the newspaper clipping Mom left us in the jar, Smiley was made by Shawnee Pottery of Zanesville, Ohio, sometime after 1937. We don’t use him for cookies anymore, because of his delicate condition, but he’s been replaced by another pottery pig jar whose belly always seem to welcome homemade cookies of any description. In the past couple of years, we’ve been trying to establish a tradition of baking cookies with our granddaughter Anna whenever she comes to visit, and as we put the cookies into the pig, I always point out Smiley, who sits on a high position above the kitchen cabinets,and tell her how he was always full of cookies whenever I visited my Grandma. Hopefully, some day that story will be passed on, and the cookie pig will continue to be filled, particularly in these special holiday seasons. Happy December!

Photo taken with Nikon D800 and 85mm f/1.4G lens, at ISO 200, f/3.5 and 1/60 sec., with off-camera flash. Image was shot as raw, and developed in Lightroom 4.4. Minor post-processing in Photoshop to add a vignette effect to corners in order to tone down some of the brighter lights in the background.