I originally created this piece about a year ago, but the quotation was set in type rather than hand calligraphy, and that never made me quite happy. Today I re-worked it with a calligraphic treatment, and I think I’m much happier with it now. This is one of those quotes that I saw somewhere, wrote down in my notebook, and never really questioned the attribution. I hope Mark Twain really said it; some Internet sources seem to cast doubt on that. I like it, anyway. 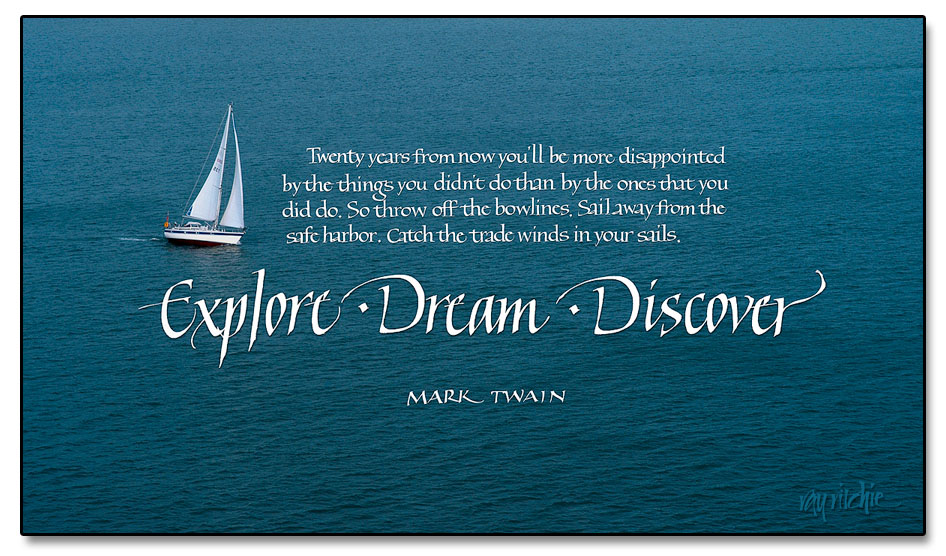 The photo was taken several years back when we were on a cruise around the British Isles  - I believe we were pulling out of Southampton harbor at the time. As usual, you can click on the image above to see a larger version.

Note for those sharp-eyed readers who may have seen the original version of this post: Yes, I did make a couple of changes. I decided that my two “D’s” in “Dream” and “Discover” were too different in shape, so I replaced one of them by a copy of the other. And after looking at the image awhile longer, I decided the word “Explore” was a little too compressed compared to the other two title words, so I did a small amount of manual kerning by sliding the letters around in Photoshop. Ah…all better now. (If you’d like to compare the two, the original can still be seen in the comments log at http://www.rritchie.com/wordpress/?attachment_id=788#comments)