One of the hazards of being interested in lettering is that you sometimes find yourself looking more at form than content. We recently went to see the movie The Descendants, and during the opening credits I found myself looking at the form of the lettering and the backgrounds, and asking myself “How would I do that?” I have no idea what the credits actually said.

Similarly, when I was doing my recent post about my grandfather’s watch, I kept looking at the engraved lettering on the works of the watch and wondering “What does that alphabet look like?” and “What can it be used for?” You can see part of the lettering in the photo montage in the previous post – the full text on the case reads “Hamilton Watch Co., Lancaster PA., 21 Jewels.” Just for grins, I made a sketch of the letters one evening a week or two ago, and then started to imagine what some of  the missing letters of the alphabet might look like. Here’s a quickie Photoshop composition based on one of my sketches:

I started out by just sketching the letters above as black outlines. After scanning them into Photoshop, I filled them in with a solid color, and then touched up the edges to remove some of my pen bobbles and other irregularities. I then added the beveled debossed effect as a Layer Style, and generated a wavy background pattern to echo the fancy decorative milling on the actual watch works (again, you can see the authentic decorative milling patterns in my original post). Finally, just to add a little more interest and texture, I layered in one of my closeup photos of the actual watch.

As with many of the things I show on this blog, I don’t have any immediate application for this lettering, but I think the font could be useful someday as a titling font when I want something that suggests antiques. I’d have to clean it up, of course, but that is pretty straightforward to do (though tedious) using the vector drawing capabilities of either Photoshop or Adobe Illustrator. Here’s an example of what the letters look like when I start to clean up my sketches a little:

If I were really going to develop the full font, I’d need to look carefully at all the letter proportions relative to each other – that “D” looks a little wide to me right now compared to the “R,” for example – and I’d have to figure out the full set of decorative caps, as well as the lower case letters; but I may do it, if I find the right project that calls for an old-fashioned feel to the text. Can you think of any applications for these letters? I’d love to hear from you.

I recently inherited a pocketwatch. It’s a Hamilton Model 992 “railroad” watch, so-called because this model became one of the standard accessories of the railroad conductor in the US at the turn of the 20th century. This watch had been sitting on the dresser in my parents’ bedroom, mounted on a brass stand, for a number of years. I assumed the stand was something my mother had found for my dad, and that this was probably his father’s watch. When I first brought it home and wound it, it seemed to run fine, but I had no idea about how to set it, or even open the case. After a bit of web research, I learned that the case was a screw-on style, and that the watch could be set by opening the “crystal” (which is really a form of plastic) and pulling out a setting lever, which would then allow the hands to be set with the stem. I also saw photos on the web that showed that the watch serial number would appear on the works, beneath the back case. When I unscrewed the back, I was surprised by a tattered piece of paper falling to the floor. Picking it up and turning it over, I found a photograph, not of my father’s mother, but my mother’s mother. So now it appears this watch was owned by my Granddad Bourne, not Granddad Ritchie.

All the photos I had ever seen of Grandma Bourne in her young days were serious, unsmiling portraits, usually in a family group. This one, in contrast, is almost a glamor shot, with Grandma posed pulling up her hair behind her head, smiling – my guess is that it may have been a special memento she had made especially for Granddaddy, perhaps some time around World War I, when he was stationed at Camp Zachary Taylor, in Louisville, Kentucky. The camp was opened in 1917, and closed in 1920. Other than my grandfather, one luminary of note stationed there was F. Scott Fitzgerald.

From the serial number inside the case, I learned (from tables of serial numbers on several watch collector websites) that this watch was manufactured in Lancaster, Pennsylvania around 1905. Since Granddaddy would have been only 12 years old that year, it seems likely that the watch may have originally belonged to someone else – maybe his father. 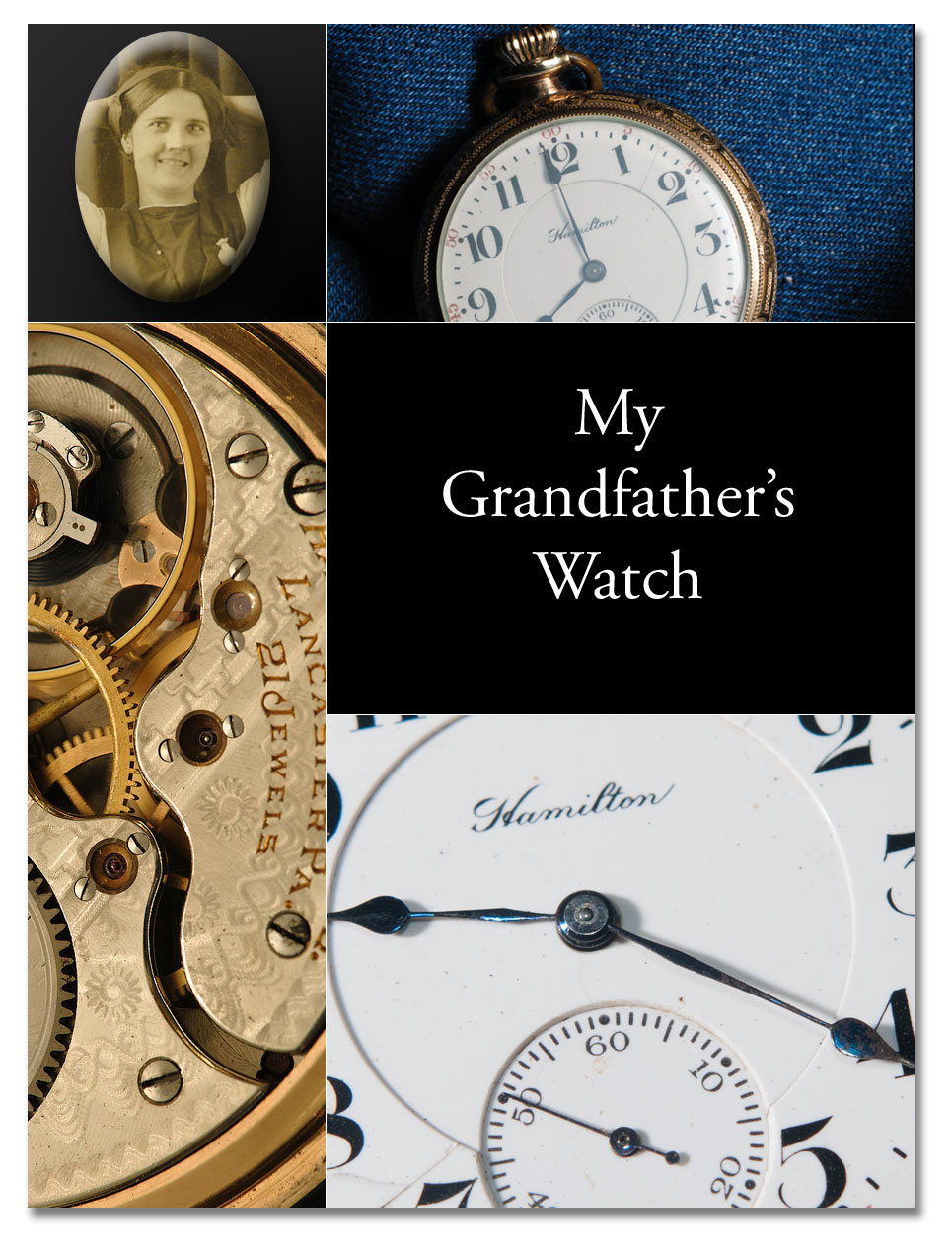 The photo of Grandma in the montage above has been heavily retouched – the original had many cracks, scratches, and stains. I’ll try to do another post showing the “before” and “after” of that restoration. I don’t think the watch is especially valuable, but it’s at least a nice curiosity, since it works and was one of the earliest copies of this model. The 992 was apparently introduced in 1903, and I believe only about 8000 had been made by 1905; however, several hundred thousand copies were eventually manufactured, so it’s not a rare specimen. This particular watch has cracks in the porcelain face, which reduces its value to collectors. Still, to me it carries timeless, invaluable memories. It is now sitting on my dresser, keeping time to within about 30 seconds a day, and I think of my grandparents each day as I wind it.